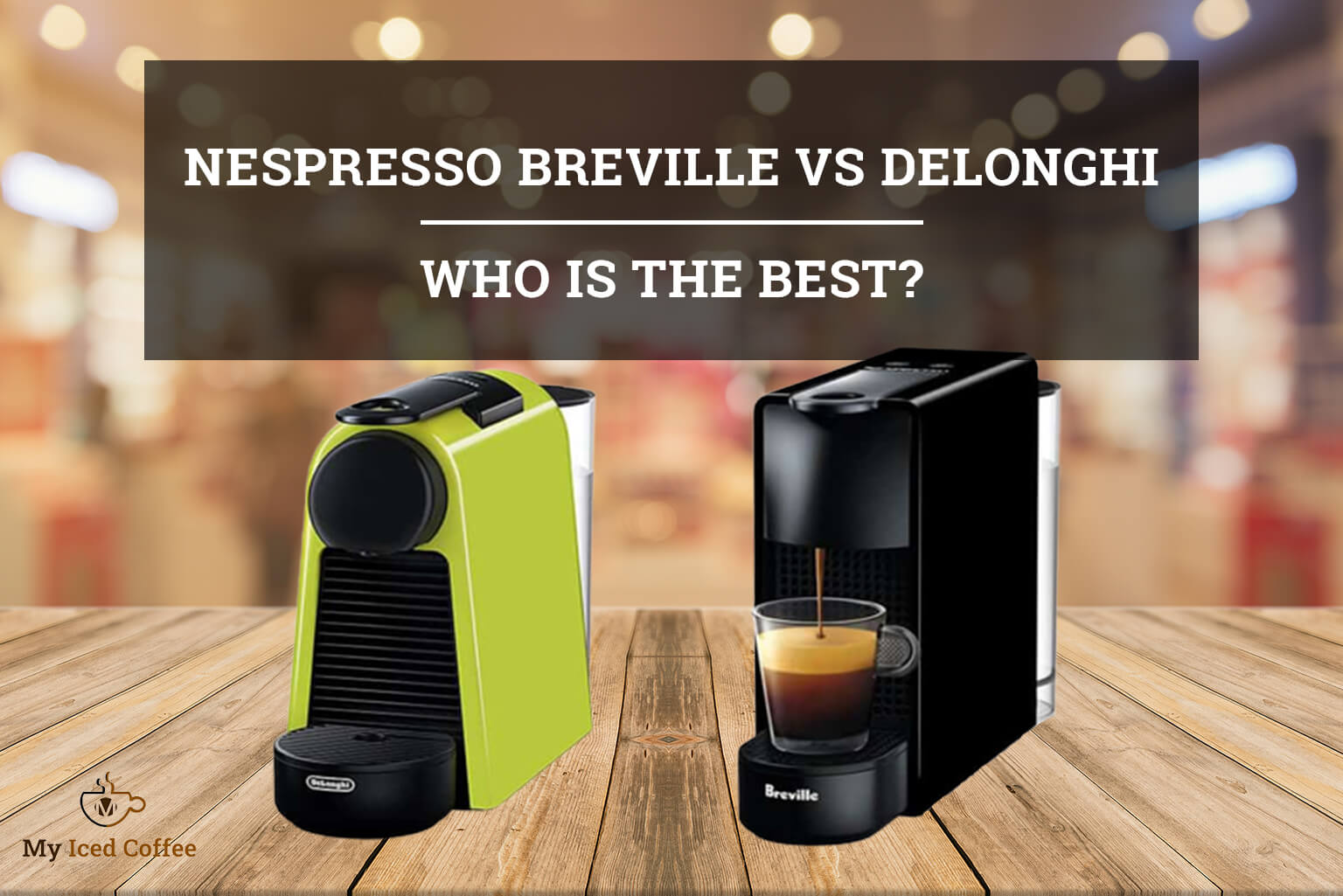 This is our comparison of Nespresso Breville Vs. Nespresso Delonghi, the popular espresso machines.

Confused between Nespresso Breville and Nespresso Delonghi? Well, I’ll help you in making the best decision. As an avid coffee drinker, I’ve been through quite a few coffee machines.

P.S. I’ve tried both Nespresso Breville and Delonghi machines, and that’s why I want to give you some insights. I guarantee that by the end of this comparison, you’ll find your coffee partner.

Brief Confessions (To Be Told)

Bought a Nespresso machine and found Nespresso’s name imprinted on the coffee maker? This has created tons of confusion.

Like, why not Delonghi and Breville if they are manufacturing Nespresso machines?

Searching for the perfect espresso machine to adorn your kitchen counter and came across Delonghi and Breville, right!

These established companies from North America are the manufacturing partners of Nespresso who churn out the machines at their factories.

Want to know the background of Delonghi and Nespresso? Let’s dive in!

Delonghi is an Italian coffee maker brand and is the perfect option for those when it comes to choosing automatic espresso machines.

The main difference between the Delonghi and Nespresso machines is that the earlier one is a bean-to-brew coffee maker company while the later is a pod-based coffee-making company.

I get what you’re thinking right now, what would a Nespresso and Delonghi espresso machine be like?

Alright! When Delonghi and Nespresso collaborate for the making of espresso machines then they are pod-based. You’ll notice that Nespresso by Delonghi usually includes an integrated hot milk system and a bigger water reservoir.

Breville is an Australian coffee maker brand that gives you more manual control over espresso shots like cappuccinos, americanos, and lattes.

Breville is usually prominent for its articulated designed steam wands for milk steaming and is also a bean-to-brew coffee maker parallel to Delonghi.

When it comes to Breville and Nespresso partnering up, these espresso machines are pod-based. Breville-Nespresso is based in the United States, Canada, New Zealand, Hong Kong, and some of its machines are produced in China.

Comparison between Nespresso Breville and Delonghi

A quick reply to that is that there is no difference between Nespresso Delonghi and Breville. WHY?

The reason is Delonghi and Breville are just the manufacturing companies for Nespresso. They’ll make machines whose technical specifications and general technology will be identical. Both brands use the exact pressure, capsule, brew ratio, water tank, and temperature.

The outcome? The quality of the coffee will remain the same no matter what; Nespresso pods fit in all machines.

The brewing system of the Nespresso DeLonghi and Breville coffee machines is similar. They use centrifusion technology and barcode reading. Both brands produce exquisite coffee in 5oz, 8oz, 14oz, and 18oz cup sizes.

There is one thing to differentiate the Nespresso Delonghi and Breville and that is APPEARANCE.

Yes! Cuz it’s all about looks.

The design differences between them are very subtle. For instance, Breville’s machine typically has a more rounded top than Delonghi’s square aesthetics. When it comes to aesthetics, some find the Breville machines’ artistic style more palatable, while others prefer the sleek, straightforward design of the De’longhi machines.

But keep in mind that other than appearance there is no difference in the internal apparatus of these machines.

Both Breville and DeLonghi have the following Nespresso machines:

Most of the above-mentioned models came up with the Nespresso Aeroccino milk frother.

Nespresso Vertuo Next – Breville Vs Delonghi

Apart from centrifusion tech and barcode reading, Nespresso Vertuo Next has the connectivity feature, which means you can connect your machine to your Wi-Fi or Bluetooth. Also, it comes with Aeroccino 3 by Breville and Delonghi.

Nespresso Vertuo Next by Breville comes with a sleek chrome finish, in light gray and red. Delonghi comes with an aesthetic design, including black with metallic rose gold, white, dark gray, and black matte. The best part: their machines will give you complimentary welcome kits for the first use.

Apart from centrifusion tech and barcode reading, Nespresso Vertuo Plus Breville and Delonghi have motorized opening and closing, automatic coffee pod ejection, and automatic off mode.

Nespresso Vertuo Plus by Delonghi has a chrome finish with a flat top and black, gray, ink black, red, titan, and LE black matte colors. While the Breville one has a rounded top and has a gray and black matte finish.

Nespresso Citiz Breville and Delonghi come in a slim and compact design with two programmable cup sizes. Both models have an adjustable water tank and built-in Aeroccino milk frother. Whether it is Nespresso Citiz by Delonghi or Breville both give you two coffee alternatives, namely, lungo and espresso.

Nespresso CitiZ by Breville has red and silver options, while the DeLonghi has black, white, and chrome finishes. Also, Delonghi has a higher spout than Breville.

Nespresso Essenza Mini by Breville and Delonghi is a perfect space-saving option. It also has a 19-bar pump pressure for its extraction method and It has a three minutes eco-mode after the last brewing. The best part: it will automatically shut off after nine minutes.

Breville and DeLonghi Have Exclusive Nespresso Machines Too

Take a look at the models which particularly belong to Breville and Delonghi.

The Nespresso Creatista machines are purely specific to the Breville company. Let’s have a run-down!

These all have one thing in common they can make: Ristretto, Espresso, Lungo, Caffe Latte, Cappuccino, and Latte Macchiato. Also, all of them are available in 4 color options: stainless steel, black, black sesame, Royal champagne.

The Nespresso Lattissima machines are purely specific to the De’Longhi company. Let’s see what it has to offer!

Should You Get A Breville Or Delonghi Nespresso Machine?

From the above-mentioned pointers, it is clear to you that Nespresso machines manufactured by Delonghi and Breville function the same with the same taste of coffee.

The only difference is in their cosmetic designs and variations in colors. Nespresso by Breville has a rounded top with variations of colors. Whereas, Nespresso by Delonghi has a squarish finish with basic colors to choose from.

Now, it’s the game of aesthetics and colors which you prefer as, at the end of the day, both will produce the same tasting coffee; they take the same Nespresso capsule and function the same.

Is Nespresso made by Delonghi?

Yes, Nespresso machines are manufactured by Delonghi, but their internal functions are invented by Nespresso itself. That’s why they follow the underlying Nespresso technology and you’ll get the same shot of espresso.

Which is the best Nespresso Machine?

Nespresso by Breville and Delonghi have the exact technology. The only difference between them is in their cosmetic designs, i.e. Breville ones have a dome-shaped top and Delonghi has a flat one.

Should I buy the Nespresso Original Or Vertuo?

You can buy either depending on your choice. But Nespresso VertuoLine will offer a broader range of coffee.

Which Nespresso machine makes a latte?

How often should Nespresso machines be rescaled?

It is recommended by Nespresso itself that descaling of your machine must be done by every 6 months atleast or after every 600 capsules used.

Emily James is a Managing Editor and a coffee snob, which means she never misses her coffee doze in the morning. And why would she? IT'S A BOOSTER, RIGHT!
She believes that each coffee mug is an adventure, and that's why she is always on the lookout for the newest coffee gear. Being a coffee fanatic, she particularly enjoys sipping coffee around a bonfire in winters. 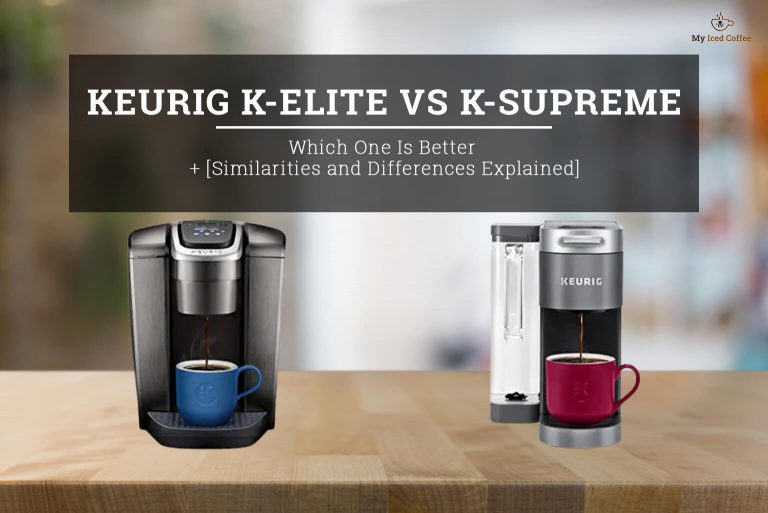 The K-Elite and the K-Supreme are both some of Keurig’s most popular models. Since they’re both from the same company it can appear as though they are quite similar but there are actually a few key differences between the two. So, which one should you go with? We tested both machines on the factors that… 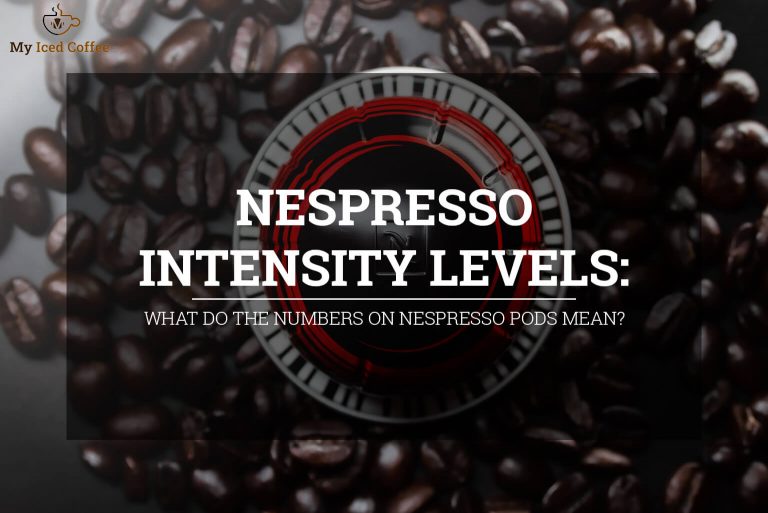 Nespresso is world-famous for its top-quality coffee machines. These machines use coffee capsules of different flavors containing coffee beans to brew coffee without a hassle and within a few minutes. It produces flavorful coffee once a capsule of your choice is inserted into it, some water is added to the container and with a push… 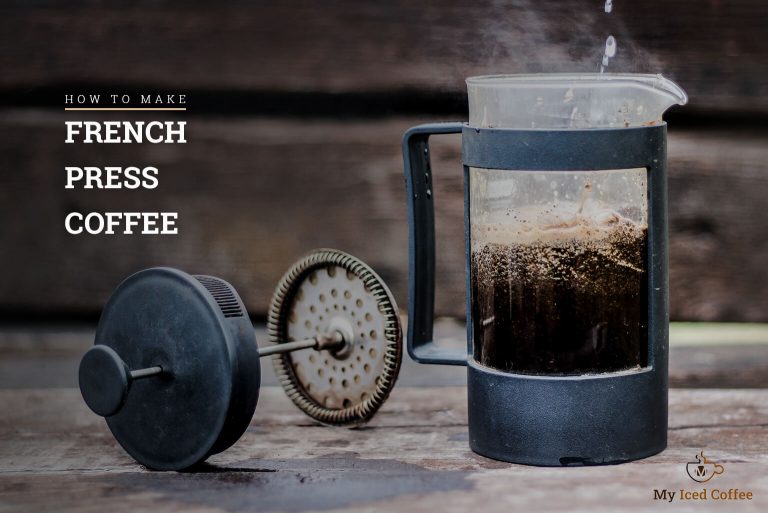 Did you just get a new French press and are having trouble using it? You have come to the right place. The French press is a cylindrical pot with a plunger and built-in filter screen that presses hot water through the ground coffee, producing an earthy, deep flavor in your daily cup of coffee. French… 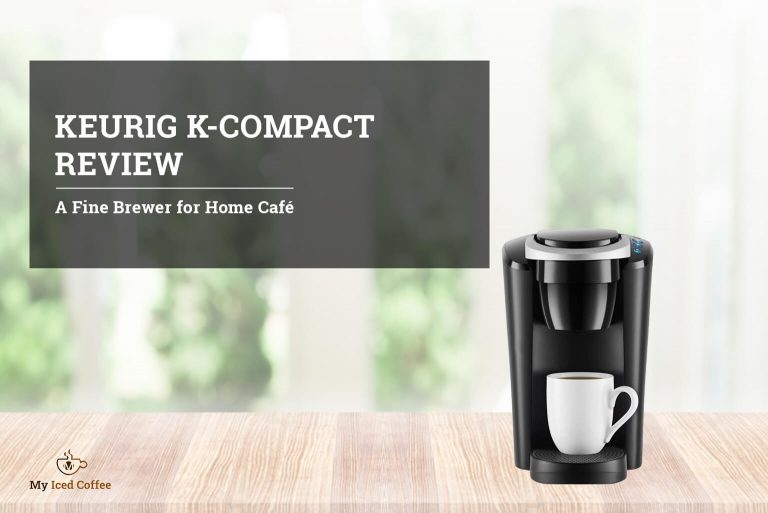 This is a review of the Keurig K-compact – a premium coffee machine within an affordable range. Are you willing to spend a few dollars daily to get your favorite brew? No doubt, a brewed cup from coffee shops has a signature taste. But, many of us don’t prefer to spend time waiting outside coffee… 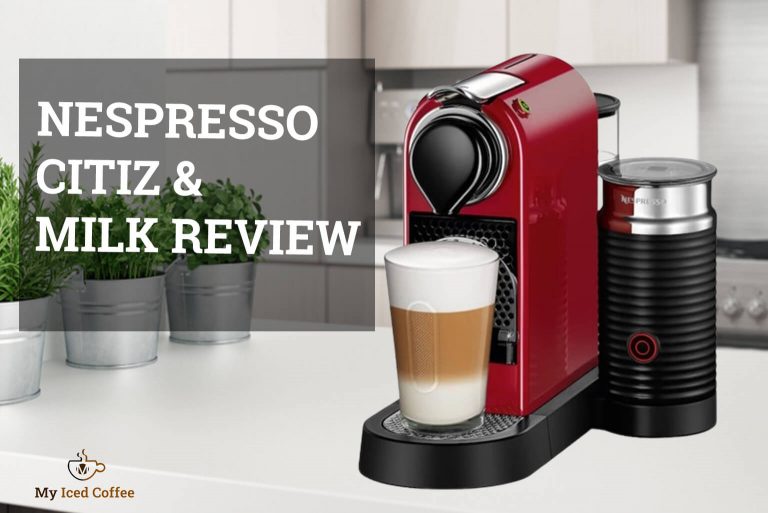 Nespresso Citiz & Milk Review Coffee Quality Ease of Use Brand Reputation Durability 4.5 The Bottom Line Nespresso Citiz sleek in design, is known for its 33 oz water tank, the largest after the 50.7 oz of Nespresso Creatista in the Nespresso OriginalLine series. Its 19-bar pressure system brews espresso and lungo via its practical… 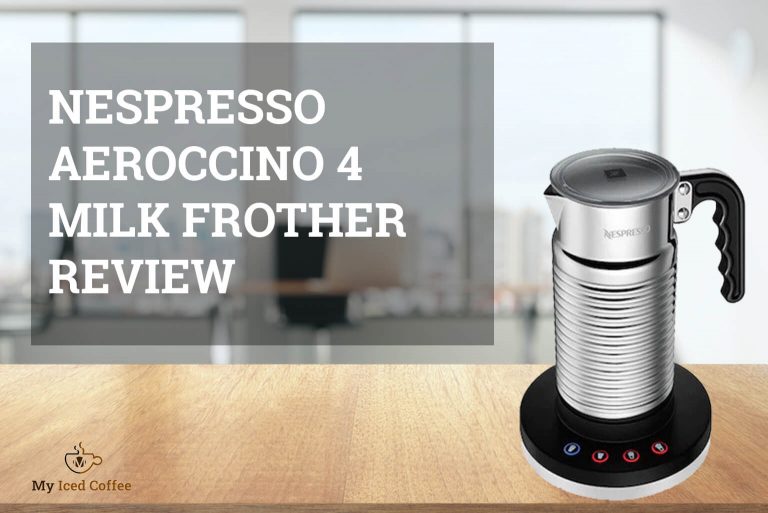 Nespresso Aeroccino 4 Milk Frother Review Froth Quality Brand Reputation Durability Ease of Use Extra Features 4.3 The Bottom Line With cold and hot frothing picks, the Nespresso Aeroccino 4 offers you fancy cafe-style beverages. In less time, you can get magnificent milk foam with a single touch of a button and a single whisk….